600 participants from 10 countries are making more than 1.900 starts this weekend.

6th June PM 3.15 - Because of extra registrations and feedback the following adjustments has been made.

Participant lists will be updated regularly after the deadline for registration and up to the start of the event.

The final timeschedule will be published here approx. one week before the event and will be sent to all participating clubs.

It is allowed to participate in an older age group if you want to.

Confirmation of participation
No later than 1 hour before the start of the event you have to confirm your participation at the board at the middle of the stand
This goes only for the 40-400m and the hurdle events, and NOT in the longer races, the jumps and the throwing events.
No confirmation means that you will not be allowed to start in that specific event.
No confirmation is needed in the relays.

For al the running events, you should wear the number on your front.
In the jumping and throwing events it is up to you where to place the number.

Generel warming up is outside the stadium on the football lanes. Exit is at the 300/1.500m start at the discus cage.
Specific warming up at the diffenrent events can start up as soon the last competition has ended.
In the throwing events only officials are allowed to be in the throwing area because of the risk for being hit by the implements!

Please notice that on Saturday there will be running up to and including 80m on the opposite side of the home stretch.
Long Jump A are at the finish line while Long Jump B are at the start of the 100m.

Seedning and qualification for Finals

40-80 meter
The winner of each heat and the fastest times goes to the final with 8 participants. With 25 confirmed athletes there will be semi-finals.
Are there no more than 8 athletes they will only run the finale. Fastest times will always have the middle lanes.

200-300 meter
Direct finals with the fastest athletes in the last heat. Fastest times will always have the middle lanes.

400 meter
Youth athletes up to 11 years runs with mass start. Older runs directly finals with fastest times in the last heat.
Fastest times will always have the middle lanes.

300-400m hurdles
Direct finals with the fastest athletes in the last heat. Fastest times will always have the middle lanes.

Everyone gets 3 attempts.
Then there are 3 further attempts for the top 8 in each age group. G7 and B7 only gets 3 attempts, there is no finals for those age groups.
There will be a new seeding after the 3rd round, so the best athlete jumps / throws last.

In the group aged 12 years and older will be prizes for the top 3 in each event.

Special performance awards are in the pipeline - more info later!
Drawing prizes will be announced later.

Jumping Zone in Long and Triple Jump
All age groups up to and including G13/B13 are jumping from a 1 metre wide zone.

Triple Jump
There will be 2 boards for each group 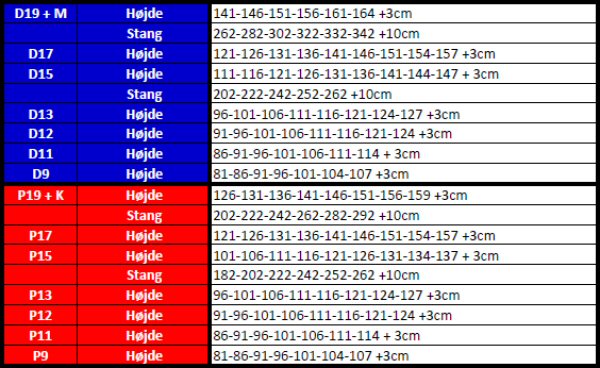 Weigth for the throwing implements 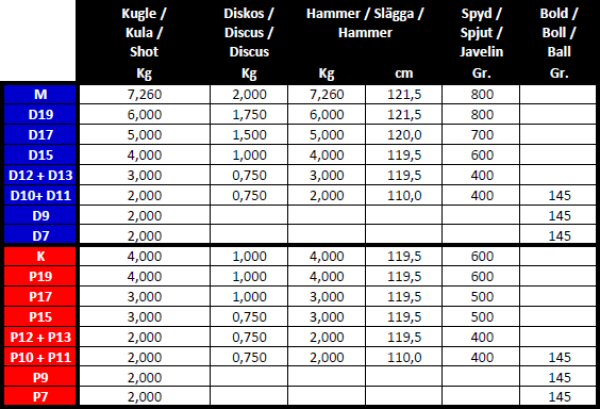 Use of own throwing implements
They have to be controlled at the Competition Office no later than 1 hour prior to the start of the competition. 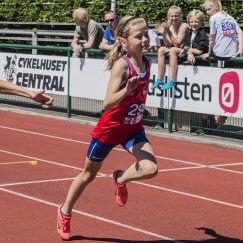 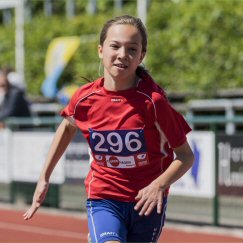